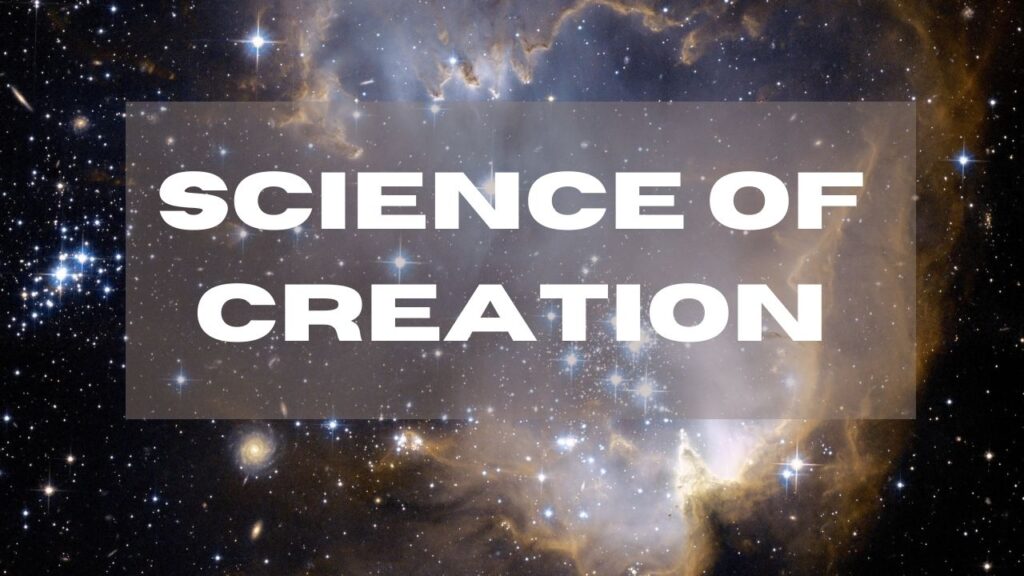 The Qur’an says that “the heavens and the earth were joined together as one unit, before We clove them asunder” (21:30). Following this big explosion, Allah “turned to the sky, and it had been (as) smoke. He said to it and to the earth: ‘Come together, willingly or unwillingly.’ They said: ‘We come (together) in willing obedience'” (41:11). Thus the elements and what was to become the planets and stars began to cool, come together, and form into shape, following the natural laws that Allah established in the universe.

The Qur’an further states that Allah created the sun, the moon, and the planets, each with their own individual courses or orbits. “It is He Who created the night and the day, and the sun and the moon; all (the celestial bodies) swim along, each in its rounded course” (21:33).

“The heavens, We have built them with power. And verily, We are expanding it” (51:47). There has been some historical debate among Muslim scholars about the precise meaning of this verse, since knowledge of the universe’s expansion was only recently discovered.

The Qur’an states that “Allah created the heavens and the earth, and all that is between them, in six days” (7:54). While on the surface this might seem similar to the account related in the Bible, there are some important distinctions.

The verses that mention “six days” use the Arabic word “youm” (day). This word appears several other times in the Qur’an, each denoting a different measurement of time. In one case, the measure of a day is equated with 50,000 years (70:4), whereas another verse states that “a day in the sight of your Lord is like 1,000 years of your reckoning” (22:47). The word “youm” is thus understood, within the Qur’an, to be a long period of time — an era or eon. Therefore, Muslims interpret the description of a “six day” creation as six distinct periods or eons. The length of these periods is not precisely defined, nor are the specific developments that took place during each period.

After completing the Creation, the Qur’an describes that Allah “settled Himself upon the Throne” (57:4) to oversee His work. A distinct point is made to counter the Biblical idea of a day of rest: “We created the heavens and the earth and all that is between them in six days, nor did any sense of weariness touch Us” (50:38).

Allah is never “done” with His work, because the process of creation is ongoing. Each new child who is born, every seed that sprouts into a sapling, every new species that appears on earth, is part of the ongoing process of Allah’s creation. “He it is Who created the heavens and the earth in six days, then established Himself on the Throne. He knows what enters within the heart of the earth, and what comes forth out of it, what comes down from heaven, and what mounts up to it. And He is with you wherever you may be. And Allah sees well all that you do” (57:4).

The Qur’anic account of creation is in line with modern scientific thought about the development of the universe and life on earth. Muslims acknowledge that life developed over a long period of time, but see Allah’s power behind it all. Descriptions of creation in the Qur’an are set in context to remind the readers of Allah’s majesty and wisdom. “What is the matter with you, that you are not conscious of Allah’s majesty, seeing that it is He Who has created you in diverse stages? See you not how Allah has created the seven heavens one above another, and made the moon a light in their midst, and made the sun as a (glorious) lamp? And Allah has produced you from the earth, growing (gradually)” (71:13-17).

The Qur’an describes that Allah “made from water every living thing” (21:30). Another verse describes how “Allah has created every animal from water. Of them are some that creep on their bellies, some that walk on two legs, and some that walk on four. Allah creates what He wills, for truly Allah has power over all things” (24:45). These verses support the scientific theory that life began in the Earth’s oceans.

While Islam recognizes the general idea of the development of life in stages, over a period of time, human beings are considered as a special act of creation. Islam teaches that human beings are a unique life form that was created by Allah in a special way, with unique gifts and abilities unlike any other: a soul and conscience, knowledge, and free will. In short, Muslims do not believe that human beings randomly evolved from apes. The life of human beings began with the creation of two people, a male and a female named Adam and Hawwa (Eve).

The Qur’an describes how Allah created Adam: “We created man from sounding clay, from mud moulded into shape…” (15:26). And, “He began the creation of man from clay, and made his progeny from a quintessence of fluid” (32:7-8). Thus, human beings have a fundamental attachment to the earth.

While the creation of Eve is not described in detail, the Qur’an does make it clear that a “mate” was created with Adam, from the same nature and soul. “It is He Who created you from a single person, and made his mate of like nature, in order that he might dwell with her in love” (7:189). She is not mentioned by name in the Qur’an, but in Islamic tradition she is known as “Hawwa” (Eve).

From these two individuals, generations of human beings have inhabited the earth. “Oh humankind! We created you from a single pair of a male and a female, and made you into nations and tribes, so that you may know each other (not that ye may despise each other). Verily the most honored among you in the sight of Allah is the who is the most righteous of you. And Allah has full knowledge and is well acquainted (with all things)” (49:13).

Excerpted and adapted from: Creation of the Universe