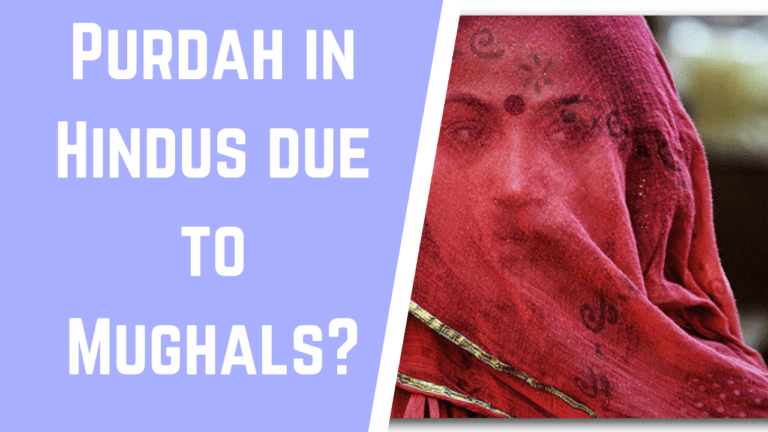 Purdah in Hindus due to Mughals?

Indian hate-cum-lies campaigns say that there wasn’t any veil culture among women in India but it started due to Mughal rule in order to save women from the evil eyes of Moghul!

Covering the head is good or bad – we leave it to the wisdom of readers. Let us focus on the allegation part.

It is true that Hindus and Muslims have influenced each other culturally because of living together for thousands of years. It’s quite natural.

For centuries, Hindu women have been putting veil/covering heads (famously called ghunghat) in front of their father-in-law and husband’s elder brother (jeth) and other elders of the family – naturally they were not Mughals!!

Why do today’s women observe Ghunghat/veil in many parts of India? Are they ruled by Mughals or are their family members Mughals?

A very weird argument is given by some people – “Look at the drawings of Ajanta and Elora, women are not covering their heads”, thereby it proves that women in ancient times did not cover. They forget to mention that in Ajanta &amp; Elora paintings, women are not only nude but displayed in worst possible vulgar ways. Does this mean that ancient Indian women did not cover themselves or practiced shamelessness openly? Of course NOT!

It has become a habit of Indian hate campaign these days to blame Muslims for everything. Swami Vivekananda, a highly revered personality in India, has condemned this attitude of Hindus.

He says that there have been many wrong practices in ancient Indian civilization, which are mentioned in the scriptures as well and Brahmans and commentators are well aware of those. It’s wrong to blame Muslims or someone else for such vile practices. He gives the example of Grihya Sutras and Vedic Ashvamedha sacrifice. Swami Vivekananda says;

‘A girl of eight is married to a man of thirty, and the parents are jubilant over it.… And if anyone protests against it, the plea is put forward, “Our religion is being overturned.” What sort of religion have they who want to see their girls becoming mothers before they attain puberty even and offer scientific explanations for it? Many, again, lay the blame at the door of the Mohammedans. They are to blame, indeed! Just read the Grihya-Sutras through and see what is given as the marriageable age of a girl…There it is expressly stated that a girl must be married before attaining puberty. The entire Grihya-Sutras enjoin this. And in the Vedic Ashvamedha sacrifice worse things would be done… All the Brâhmanas mention them, and all the commentators admit them to be true. How can you deny them?

What I mean by mentioning all this is that there were many good things in the ancient times, but there were bad things too. The good things are to be retained, but the India that is to be, the future India. must be much greater than ancient India.’

Moreover, there are references of women covering and dressing modestly in Hindu traditions.

Just, ponder over one mantra of Rigveda.

“Women should be modest in dressing and behavior, lower down the gaze, body should be covered“. Rigveda 8:33:19 Commentary by Pandit Harisharan Siddhantalankar

Women covering their body and head has been part of Indian culture for ages.